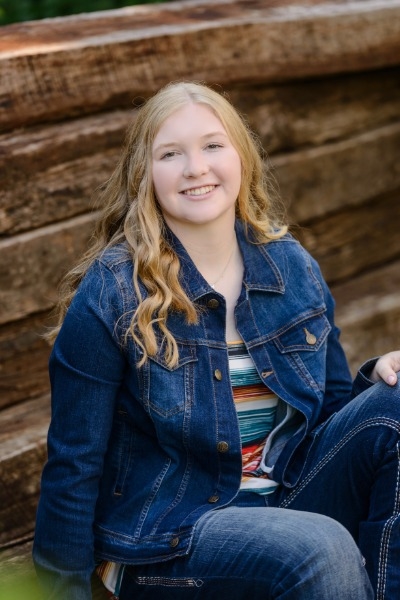 Alexandra Miller, daughter of Phillip and Renee Miller, was born on July 13th, 2002. She has four siblings Brennan (22) and fellow seniors Emily, Keith, and Victoria. Alexandra, also known as Alex, mentioned that her most memorable family vacation was when they went to the exotic animal ranch in Seneca, NE. “My family and I tubed down the river, fed a kangaroo, camel, zebra, and many other out of the ordinary animals. We also played sand volleyball and had fun family time.” She also mentioned that her favorite childhood memory was being out on the farm and playing with her cat, Rocket.

Alex was involved in several sports but has said that track is her favorite due to the fact that she loves to run. Her biggest accomplishment involves going to state track her freshman year, placing in track and cross country, and getting back into running again. When in school, you could constantly see Alex working in the shop on many of her welding and woods projects, making the Ag and Industrial Tech classes her favorite.

The person who has made the biggest impact on Alex’s life thus far is Mrs. Megan Hubl. “Mrs. Hubl is a person that has impacted my life in a great way. She has always been there for me on a personal level as well as helped me with my educational struggles and accomplishments.” As her TeamMate, Alex knows that Mrs. Hubl will continue to be a life-long friend and is so grateful for her being in her life.

Alex’s piece of advice for the underclassmen is to “be you and do not let others bring you down.” She also wanted to let them know that they need to keep working hard even when it seems all too easy. After graduating from Lawrence/ Nelson, Alex wants to attend college. She is undecided at this time on where she wants to go but thinks that she would like to major in something that involves agriculture.